Best for Heavy Jobs: Briggs & Stratton 1022ER 22-Inch Single-Stage Snow Blower
“Wasn’t expecting the power of this to be on par with a 2 stage commercial. But it is.”

Snow blowers are essential for those living in areas with a lot of snowfall. Whether it’s so you can get to work on time, or just for peace of mind in having a clear driveway and lawn, this list of the best snow blowers will make sure you’re all set. 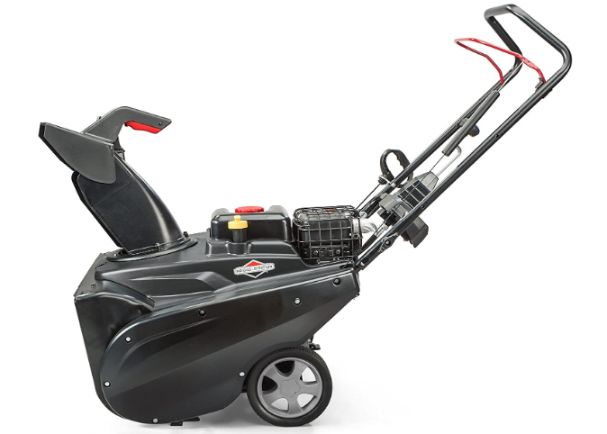 Briggs & Stratton is a major engine manufacturer that is well over a century old. It’s got a reputation for making solid engines, of course.

And that means its snow blower is one of the best snow blowers around. The gist for this product is that it’s great for powerful jobs.

There are three versions of this model, with quite a price range. But even if you buy the pricier version, it’s overall a very good deal for the money—so that’s why it’s earned the #1 spot. 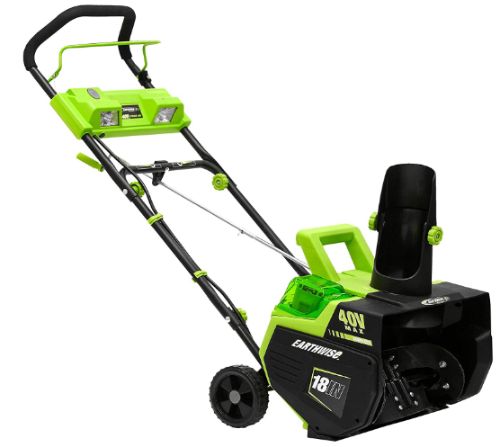 The reason this snow blower is high on the list is simple:

It’s got a lot going for it at a low cost, and its quality is supported by many reviews. It’s one of the best snow blowers within the battery-powered category and low-cost category. 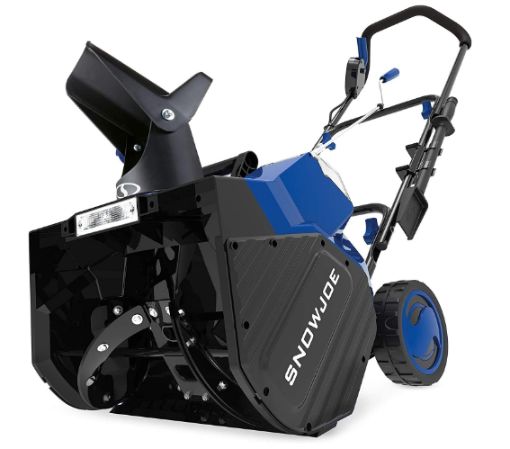 Snow Joe’s snow blower has a lot going for it. It’s been overall well-received, and packs a lot of features.

In addition to that, it’s battery powered and lightweight, making it one of the best snow blowers for ease of use. And it’s not very pricey for a snow blower of its class!

The things holding it back aren’t surprising: as a tradeoff for being lightweight, it’s not great for heavy snow clearing. 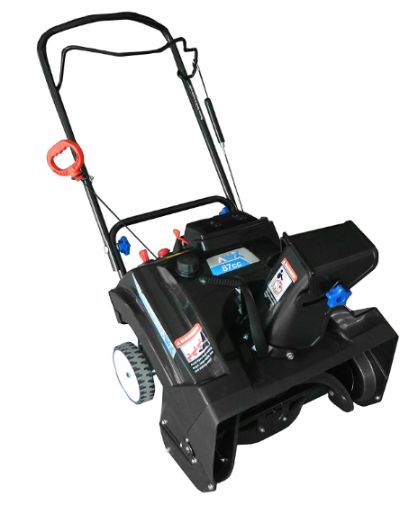 This snow blower model from AAVIX is a bit unusual compared to the others on this list, because it comes in three variations.

These variations include different sizes and electric vs. gas power.

But the prices are relatively low for all the options, and the features are different. Overall the consensus seems to be that this isn’t among the best snow blowers for heavy days, but it’s good for more casual snowfall. 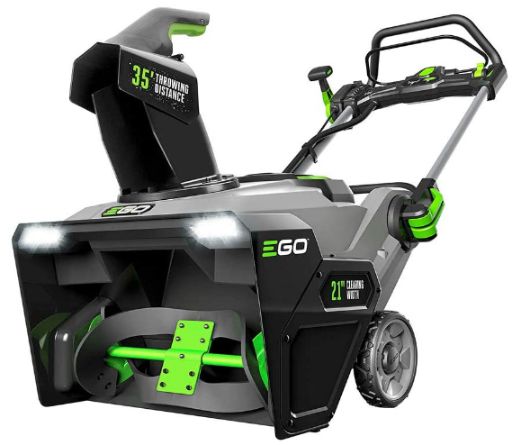 EGO Power+ may not be a brand you’ve heard of before, but this snow blower they made has been enthusiastically received by customers.

It can get the job done just fine. In fact, it’s probably among the best snow blowers that are battery-powered, like Earthwise.

The only thing holding it back that the batteries and chargers come separately, and are pricey. 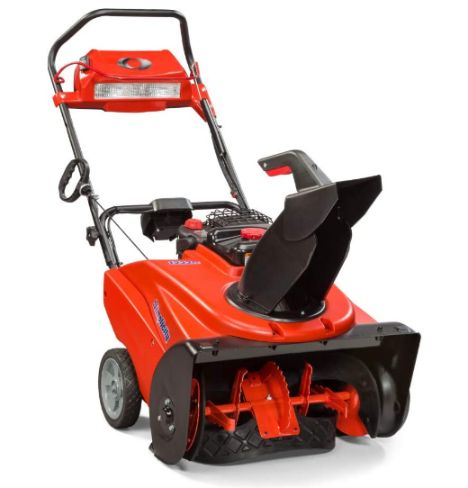 Remember Briggs & Stratton? Simplicity is actually a subsidiary of that company, though it has its own line of snow blowers.

The main downside is that there aren’t a ton of reviews—though the ones that exist are very positive—so it’s a riskier buy. 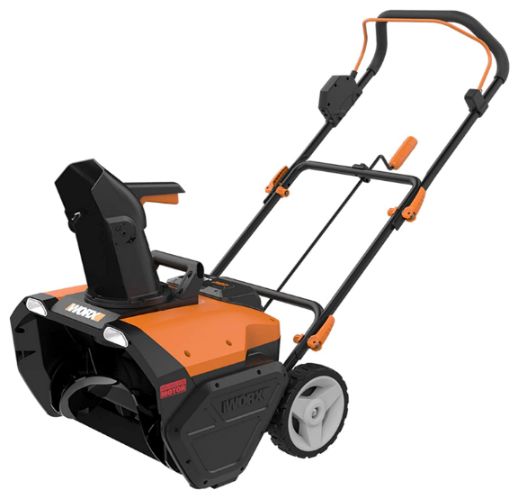 WORX is a lesser known lawn brand, but it’s still done quite well for itself. Their WG471 model has a lot of good features and isn’t badly priced for the specs, plus it’s got solid intake dimensions.

The only downside, which holds it back on this list of the best snow blowers? There aren’t any reviews on Amazon, making it a riskier buy.

It’s a close call, but ultimately our winner is the Briggs & Stratton snow blower. It may seem a bit on the pricier side, but it has a more affordable, simpler option that’s still high quality.

The reason it’s gotten the top spot on this list of the 7 best snow blowers is that it’s just plain strong. It’s good for reliability and power, and is pretty big at taking up snow. Proportionate to price, it’s very good.

But, for those with lighter snow clearing needs and tighter budgets, the second option—Earthwise’s snow blower—is one of the best snow blowers for the budget buy.

How heavy are your snow days?
This, of course, is the big question in the minds of most of you as you look for the best snow blowers. You know best what the snow is like where you live, and what your needs would be in clearing snow.

Now, in terms of getting a machine sufficiently powered to clear the snow around your home, gas power vs battery power is going to be a major point to consider. But I’ll talk about that in more detail later.

So before that, there’s something else you need to keep in mind as you shop around:

I know, I know, you want the best quality for the price. And you should!

Of course this isn’t true for every single snow blower, but it is a pretty consistent trend overall. Note that even in this list of the best snow blowers, price is roughly proportional to power.

If you need to clear a lot of snow fairly regularly, you should be prepared to buy a pricier snow blower. You can still get one that gives you good value for the money, but the starting range may be higher.

Conversely, if your snow clearing needs are less substantial, you can often get away with a more affordable snow blower. In that case, you should still make sure the machine is high-quality, and ideally has a warranty.

Again, to be clear, it’s not that the best snow blowers NECESSARILY are expensive. It’s just that the powerful ones, which may or may not be what you need, TEND to be.

Now, let’s talk about the other major point to consider, which is similar:

Gas-powered or battery-powered?
This is going to be one of the biggest points of consideration—maybe the biggest—on your end in choosing a snow blower.

To generalize, gas models are the best snow blowers for heavy-duty jobs:

They can handle deep snowfall a lot better than electric models, and many models often allow for much greater snow intake. We’re not just talking a few inches more or less of snow here; some gas models can take another foot of snow, or more, than electric counter-parts.

Not only that, but they often get the job done quicker.

So if you live in an area with very heavy snowfall, gas-powered snow blowers are more likely to be the best snow blowers.

That being said, electric models are getting better and you should check out the specifics for whichever machine you’re interested in.

Now, the drawbacks of a gas-powered snow blower, are a larger set of responsibilities for the customer/user. A gas snowblower requires oil changes, a steady flow of gas, spark plug replacement (sometimes), filter cleaning, and all that on top of general machine cleaning.

Plus, a couple basic facts of gas-powered machines will be cons to many: the smell and environmental issues.

The main advantages of electric snow blowers is that they are much easier to maintain.

It’s true that you have to recharge and replace batteries for battery-powered electric snow blowers. The thing is, though, that can still often be cheaper AND easier than oil and gas changes.

Aside from ease and cost of maintenance, there are some additional ease of use benefits with electric snow blowers:

They usually start quickly. However, it’s important to note that many gas-powered snow blowers have an electric start option, so you shouldn’t choose your power type based on that alone.

Now, in terms of price—overall, gas-powered snow blowers are more expensive than electric.

Despite that, there’s also a HUGE price range for gas snow blowers. Some can cost thousands of dollars, not including any costs of maintenance.

So you could still buy a cheaper gas-powered snow blower than a battery-powered one. It’d be better to choose based on the quality of the machine and which power method is best for your home.

Other considerations
There are still other things to consider or look for when shopping for the best snow blowers, though they aren’t as major as the two main things I pointed out above.

First, what stage model do you want?

As you can imagine, the higher your stage, the more expensive the snow blower, generally. But exceptions exist.

Second, do you think you’ll be using a heavy snow blower, or do you experience fatigue or back problems?

If so, you should probably look into features that make maneuvering physically easier on your body.

One example is power steering: some snow blowers have one-hand controls that can quickly turn the machine without much exertion.

Another example is chute rotation controls. These let you quickly turn the direction of the chute in case the wind changes or you want to direct the snow output to a new place.

Also, like I mentioned, electric start is a lot easier than the old-school pull-start mechanism…but it’s also easier on your body too, and it involves less hunching.

So there you have it: the best snow blowers of our times. In general, this list was ordered taking into account the best combinations of quality and price.

However, remember that this is a list of the best snow blowers OVERALL. It’s generalized for a large number of people:

If you’ve got heavy snow clearing needs, you may need to invest more in power: so in that case, Briggs & Stratton and EGO Power + would probably be the top two best snow blowers for you.

“This machine is amazing…quiet and clears snow in a clear fast manner. Battery last several hours, even in 0 to10 degree weather.”