Best Overall: Clore Automotive Jump-N-Carry JNC660
“I own a used car lot and when I need to jump a car […] this one always works.”
Best Budget: AUTOWN Jump Starter
“Simple to use but clamps must be attached perfectly.”
Strongest Lead-acid: Schumacher DSR118 DSR ProSeries
“It had plenty of juice to start my cranky diesel Tractor at 25 degrees.”
Best Multi-purpose: DBPOWER Portable Car Jump Starter
“Built very solid. Excellent build quality.”

Jump starters are one of the most important devices drivers can have. If your car’s battery dies or has some failure, you could be stuck on the road. But with a jump starter, you can boost your battery in an emergency.

So without further ado, here’s a list of the best jump starters, which can save you not just frustration, but potentially disaster. 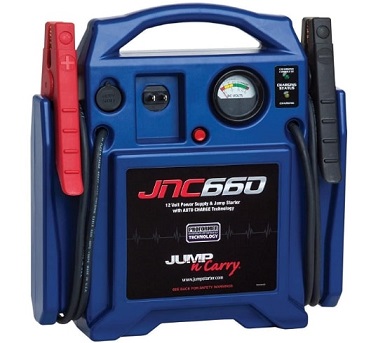 Clore’s Automotive Jump-N-Carry jump starter is one of the most popular jump starters online, and for good reason:

The 12-volt lead-acid battery packs plenty of power for the majority of personal cars, and thousands of reviews praise its reliable performance.

Plus the price isn’t bad for what you get—with all that considered, it’s no wonder it tops this list of the best jump starters. 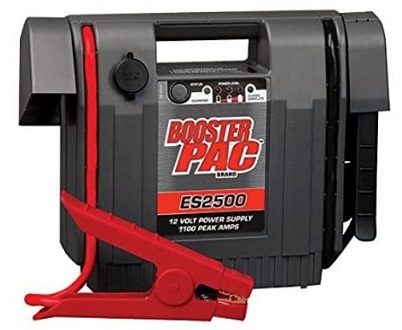 Here we have an option that is actually by the brand Clore. This is one of the most highly rated jump starters around, next to the other Clore jump starter on this list, so it should be no surprise they’re near the top of this list of the best jump starters.

It’s one of the best jump starters around because it basically does everything right, and is very well-received. 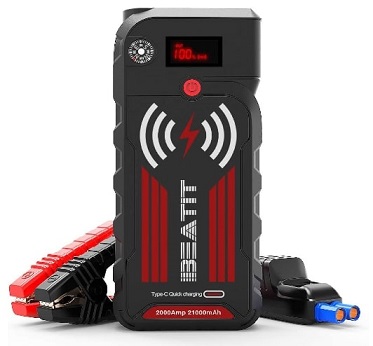 While most of the options on this list are lead-acid jump starters, this one is a lithium-ion jump starter. That means it’s more modern, smaller, and more efficient with power.
It has some features that other jump starters don’t have, because it’s also basically a power bank for electronics. 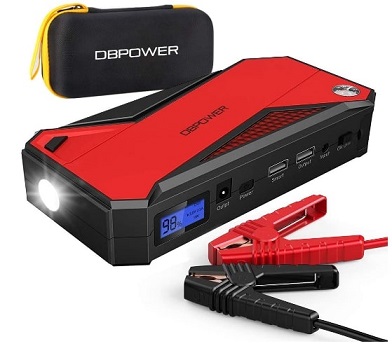 DBPOWER’s portable car jump starter is a bit different from ordinary jump starters, and that’s not surprising because of how different it looks.

But most importantly, it’s one of the best jump starters around IN GENERAL, and doesn’t cost much.

See DBPOWER 800A On Amazon 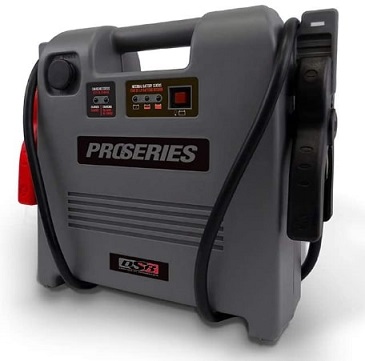 It’s earned its spot on this list of the best jump starters for being reliable and decently priced—it’s only held back by a few minor points.

In particular, though, it offers a ton of peak amps, making it one of the best jump starters with lead-acid power. 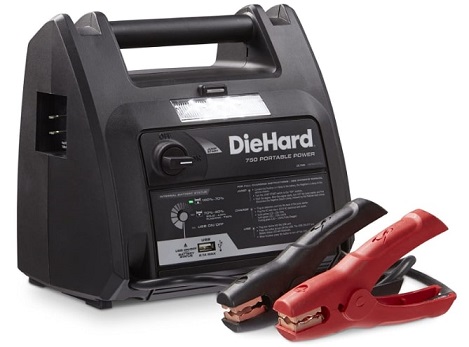 And by the way, if it seems good but doesn’t pack enough power for you, there are a couple other variations of this same product that deliver 950 and 1150 peak amps. 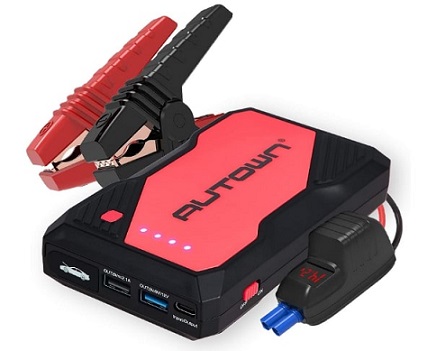 Like the other lithium-ion jump starters on this list, this AUTOWN jump starter is sleek, small, light, and packs a lot of features in addition to jump starting.

And like the others, it’s still good at the key focus here, jump starting car engines. What holds it back on this list of the best jump starters are more mixed reviews, though the reception is still very positive.

So when all’s said and done, the winner on this list of the best jump starters is the Clore Automotive Jump-N-Carry JNC660 1700 Peak Amp 12 Volt Jump Starter.

Clore’s jump starter wins because it’s gotten the best reception and is generally good at everything: it packs a lot of power, isn’t too expensive, and is fairly straightforward to use.

However, that’s just the winner of our OVERALL list. Your needs will be unique, so the best jump starters for you may be ordered a bit differently.

If portability is your top concern, for example, the BEATIT G18 QDSP 2000Amp Peak 12V Portable Car Jump Starter is one of the best jump starters you can have.

Still not sure? Don’t worry. Check out our buyer’s guide below.

What type of battery should my jump starter have?

The vast majority of jump starters can be filed under one of two categories: lithium-ion or lead-acid.

Lead-acid batteries are the sort of older-school, original model of jump starter. They’ve been around for a while and are still in use today. Lithium batteries are newer—they started showing up in the market within the last decade.

As for which is better, for most people, the best jump starters are lithium-ion. There are a few reasons for that:

Lithium jump starters are usually smaller and lighter than lead-acid ones, but are still very powerful. They also last longer in general, and retain their charge longer even when you’re not using them.

By the way, when I say that lithium jump starters are lighter than lead-acid jump starters, I don’t just mean “a little lighter.” A battery-acid jump starter can weigh up to 40 lbs, whereas a lithium one will usually weigh just a few pounds at most. Frequently, even less.

And in addition to being light, they’re also physically much smaller than lead-acid ones, making them significantly more portable.
So why would anyone still buy a lead-acid jump starter?

Well, for one thing, although lithium starters CAN pack an equivalent charge, and are significantly more efficient overall, battery-acid starters still have a generally higher range of power.

Lastly, lithium jump starters may need more charging between uses, and lead-acid ones may hold their charge longer. However, that’s a generalization, and bad lead-acid jump starters will have more difficulty holding a charge than good lithium ones.

So it should go without saying that the best jump starters can be lead-acid or lithium ion—what matters first and foremost is performance.

What type of jump starter is best for my engine?

The engine your car has affects what jump starters you should be prioritizing in your search.

Sounds simple, right? It mostly is! To give you an idea of what “bigger” means:

In fact, most electric cars and hybrids actually have two batteries. One is a lithium-ion battery (usually, or at least something similar), which is the one that gets charged via charging stations and holds the power for electric motors.

The second is usually a lead-acid battery, the same one found in gas cars. The second battery, which is generally smaller and usually 12 volts, powers other car features but also supplies power to the “main” lithium-ion battery.

This second battery is the one you’d need to jump-start, if you need to jump start your electric vehicle. So because of that, the typical range of jump starter power will usually be fine.

You can always research a little more about your specific car model to get a better idea of which jump starters are best for it, however.

What are peak vs cranking amps and how much do I need?

If you look at the descriptions of all the options here on this list of the best jump starters, you’ll find that they list numbers next to peak amps and cold crank amps, or cranking amps.

Peak amps measure the maximum power a jump starter can discharge. A peak discharge like that will usually happen very quickly, a rapid burst.

In contrast, cranking amps refer to the power that a jump starter can discharge steadily, over a longer period of time. That “longer period” though is only longer compared to a peak amp discharge: usually it’d be around half a minute.

Cold cranking amps (CCA) are not very different from cranking amps—as the name implies. It just refers to the cranking amps needed to power up a vehicle in cold weather. It can also refer to what’s needed to start older vehicles or batteries that are completely dead.

So, how much do you need?

As you can imagine, it varies depending on your vehicle. You could contact your seller or even manufacturer, or look it up online, to see how many amps you’d need.

If you have an ordinary consumer vehicle and you’re jump-starting your car in normal conditions, 400-600 amps would be fine.

If we’re talking about CCA, 400-500 CCA amps will jump start most vehicles, even some larger ones (maybe not trucks, but SUVs). If you have a normal or smaller sized car and a smaller battery, you might need just 200 amps or even less.

Both peak amps and cranking amps, including cold cranking amps, are important. As far as it relates to your product search, however, you should keep an eye on both but prioritize a higher CCA rating as it can cover more of your bases.

You might wonder if you need to match your jump starter’s CCA to your car battery’s. The answer is not really, because jump starters automatically limit and cut off power based on your battery’s capacity. So it’s unlikely you’ll transmit too much power.

And there you have it, folks! Our list of the best jump starters is topped by a lead-acid jump starter from Clore, but it’s a generalized top spot.

Remember to pay attention to your needs, particularly as it relates to the strength of the charge you need: do you have a large vehicle, an ordinary one, or even a small one? Do you live in a very cold environment? And so on.

But no matter what your circumstances, chances are at least one of the items on this list is great for you—these are, after all, the best jump starters.

“This is a real nice unit and has charged my cell phone successfully. It is nice and compact.”